The Emperor Has No Gold! 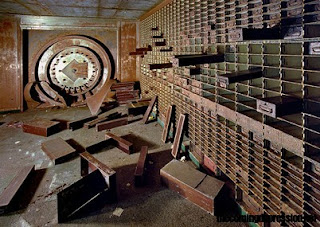 Romania has demanded for many years that Russia return its gold.

Last year, Venezuela demanded the return of 90 tons of gold from the Bank of England.

The German high court recently ruled that Germany must audit its gold reserves held in foreign countries such as the U.S., England and France. And German inspectors will actually travel to the New York Federal Reserve Bank’s gold depository and the Bank of England to inspect their gold.

Germany will also repatriate 150 tons of gold in order to test it for purity.

Ecuador’s government wants the nation’s banks to repatriate about one third of their foreign holdings to support national growth, the head of the country’s tax agency said.

Carlos Carrasco, director of the tax agency known as the SRI, said today that Ecuador’s lenders could repatriate about $1.7 billion and still fulfill obligations to international clients. Carrasco spoke at a congressional hearing in Quito on a government proposal to raise taxes on banks to finance cash subsidies to the South American nation’s poor.

Four members of the Swiss Parliament want Switzerland to reclaim its gold.

Some people in the Netherlands want their gold back as well.

Cheviot Asset Management’s Ned Naylor-Leyland says that the Fed and Bank of England will never return gold to its foreign owners.

Jim Willie says that the gold is gone.

The fact that CNBC head editor John Carney is arguing that it doesn’t matter whether or not the Fed has the gold does not exactly inspire confidence.

It’s not only Germany (who’s gold is missing), it’s the United Sates, it’s all of the countries. Nobody knows what’s in Fort Knox. They won’t let anybody in. Where’s the gold in the United States? How come we can’t go in and look in Fort Knox?

How come the people can’t have a reading? How come we can’t look at it? How come politicians can’t get in there? How come no one can get in there? The gold does not exist. All this does is confirm what so many of us already know, “The Emperor has no gold.”

There probably isn’t anywhere near the central bank gold (governments claim they possess).

Ron Paul has called for an audit of Fort Knox, based upon the suspicion by many that the gold was sold off years ago:

Others allege that the gold has not been sold outright, but has been leased or encumbered, so that the U.S. does not own it outright.

If the Western central banks are indeed leasing out their physical reserves, they would not actually have to disclose the specific amounts of gold that leave their respective vaults. According to a document on the European Central Bank’s (ECB) website regarding the statistical treatment of the Eurosystem’s International Reserves, current reporting guidelines do not require central banks to differentiate between gold owned outright versus gold lent out or swapped with another party. The document states that, “reversible transactions in gold do not have any effect on the level of monetary gold regardless of the type of transaction (i.e. gold swaps, repos, deposits or loans), in line with the recommendations contained in the IMF guidelines.”6 (Emphasis theirs). Under current reporting guidelines, therefore, central banks are permitted to continue carrying the entry of physical gold on their balance sheet even if they’ve swapped it or lent it out entirely. You can see this in the way Western central banks refer to their gold reserves. The UK Government, for example, refers to its gold allocation as, “Gold (incl. gold swapped or on loan)”. That’s the verbatim phrase they use in their official statement. Same goes for the US Treasury and the ECB, which report their gold holdings as “Gold (including gold deposits and, if appropriate, gold swapped)” and “Gold (including gold deposits and gold swapped)”, respectively (see Chart B). Unfortunately, that’s as far as their description goes, as each institution does not break down what percentage of their stated gold reserves are held in physical, versus what percentage has been loaned out or swapped for something else. The fact that they do not differentiate between the two is astounding, (Ed. As is the “including gold deposits” verbiage that they use – what else is “gold” supposed to refer to?) but at the same time not at all surprising. It would not lend much credence to central bank credibility if they admitted they were leasing their gold reserves to ‘bullion bank’ intermediaries who were then turning around and selling their gold to China, for example. But the numbers strongly suggest that that is exactly what has happened. The central banks’ gold is likely gone, and the bullion banks that sold it have no realistic chance of getting it back.

This may sound like a conspiracy theory.  But the banks have already been caught raiding allocated accounts. And governments have repeatedly been caught manipulating gold prices.  And financial companies have been caught pretending they have reserves which they don’t. And gold bars have been found to have been filled with cheaper metals.

And at least one central bank – albeit a tiny one- has already been caught holding fake gold.

And as Eric Sprott points out:

We’re not talking about conspiracy here however, we’re talking about stupidity. After all, Western central banks are probably under the impression that the gold they’ve swapped and/or lent out is still legally theirs, which technically it may be. But if what we are proposing turns out to be true, and those reserves are not physically theirs; not physically in their possession… then all bets are off regarding the future of our monetary system.

While Western central banks have frittered away their gold, China is quietly building up its reserves.

And yet – according to various sources – gold bullion brokers have not seen any gold coming from China.

In other words, China is producing more gold than any other country, but isn’t exporting any of it.

As such, China is quietly becoming a gold superpower.

Note: China has a habit of being quiet for several years at a time, and then announcing big increases in gold holdings. So quoting old numbers will only mean that one is caught flat-footed as to China’s current holdings.